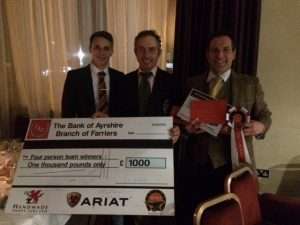 Considered to be the largest shoeing competition in the world, and indeed one of the most prestigious, the Ayrshire Branch competition is hosted by J & A Ferrie Farrier Supplies.

Having been off the ‘competition circuit’ for a couple of years Nigel has removed the rust from his tools and proven he has not lost either his enthusiasm for competing, or his competitive ability.

At last the weather is improving. It has been a very trying time for farriers and horse owners alike with endless rain, snow and mud! We look forward to a lovely spring and summer ahead and wish you many enjoyable days with your horses ahead.